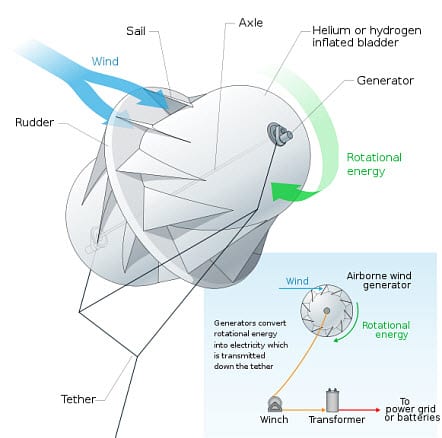 The turbine is unlike any other wind power generator simply because it can fly. Wind energy has been gaining in popularity amongst consumers and businesses, despite the chilly reception the fuel has been receiving from the U.S. government. As with other forms of energy, however, there are challenges to overcome. For wind energy, the most daunting challenge is that of harvesting.

The AWT is a wind turbine designed without a rigid support structure. The turbine is built to catch wind currents and use them to reach high altitude, though staying well below the altitude of flight for planes. The turbines will be tethered to the ground but will otherwise have free reign of the skies.

Makani claims that the turbines will be able to generate more than 1 megawatt of electricity while airborne and will weight a tenth of what conventional wind turbines weight.

Wind energy has been gaining a great deal of support and investment from companies and individuals recently, though the U.S. government has all but turned its back on the energy. Wind has traditionally lagged behind solar power in terms of acceptance, but that may soon change is Makani is able to launch their ambitious project, which is slated to begin in 2015.