Renewable energy reached a new milestone in the United Kingdom last month. According to Carbon Brief, a research and analysis firm, solar energy surpassed coal in terms of electrical production in May of this year. This represents the first time solar power has managed to accomplish this feat, but may not be the last. The United Kingdom solar energy sector has been growing aggressively in recent years, with the government showing strong support for this form of clean energy.

Solar reached 1,336 GWh of energy production in May of this year

Carbon Brief notes that solar represented some 1,336 gigawatt-hours of energy production last month, with coal accounting for 893 gigawatt-hours of production. Overall, renewable energy accounted for 50% more electrical production than coal. This highlights the progress that the clean power sector has made in recent years, with growth being powered by government incentives and a growing need for environmentally friendly forms of power. The UK is investing heavily in clean energy in order to mitigate emissions production.

Solar growth is being aided by the decline of coal energy 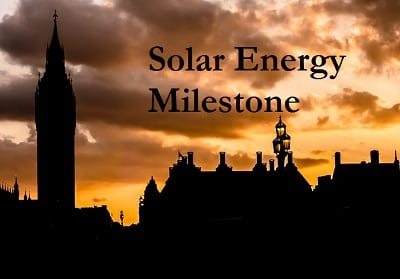 The growth in solar production is not only due to the number of new clean energy projects coming online. Carbon Brief notes that the continued collapse of the coal market also to blame for greater solar production. The coal market has been in decline since early 2012. Last year, coal generation fell to its lowest point in the UK in 55 years. Despite this, however, coal remains a prominent energy source in the country, accounting for 10% of the UK’s energy supply every year.

Several countries are seeing growth in their solar sectors

The United Kingdom solar energy market has been showing signs of promising growth, but the UK is not the only country where solar power is thriving. Recently, Chile reached its own major milestone in terms of solar power production, with solar accounting for a greater portion of the country’s energy consumption. South Africa and Germany are also becoming prominent solar power markets, with new projects coming online and contributing more energy to the infrastructure of these countries.