BigGreen, a waste management company based in England, believes that as more and more landfill sites continue to hit crisis points, new recycling laws are needed in Britain to provide greener waste management solutions, such as for food waste and scraps, most of which currently wind up in landfills.

Seven million tons of food is wasted every year by British residents.

A BigGreen spokesperson, Mark Hall, said that “It’s a well-known statistic that British homes throw out 7 million tons of food every year.” He added that “companies in the U.K. do exactly the same—another 7 million tons, and that is nothing but a national embarrassment.”

According to the waste management firm, the biggest food wasters include the food processing industry, restaurants, supermarkets and other stores, schools, hospitals, prisons and other institutions, as well as workplace cafeterias and canteens. 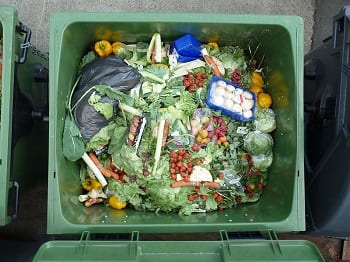 In a recent press release statement, BigGreen stated that any company or organization that regularly produces foods waste should be required by law to make the necessary arrangements to recycle this waste. The firm added that Britain should be targeting a “zero waste economy instead of allowing it to produce harmful greenhouse gases.

A newly implemented California recycling model is one BigGreen feels the British parliament should consider.

California’s Assembly Bill 1826 went into effect in that state in 2014. The recycling model requires all commercial producers of food waste within the state to have this waste composted or turned into energy through anaerobic digestion. This is a waste to energy process that breaks down biodegradable material and turns it into biogas, which can be used to generate heat or electricity, or can be converted into a renewable natural gas and as clean transportation fuel.

Composting and anaerobic digestion are the preferred methods of dealing with food waste and are a green solution compared to the alternative of dumping the food into landfills where it will rot and release methane, a highly damaging greenhouse gas. Hall said that the quicker companies start recycling the organic waste they produce, the better.

Although Hall did note that most companies and organizations may worry about the cost of a new recycling program, he said that many of them can make arrangements with their present waste management company to separately collect organic waste. Ultimately, waste companies will need to make the necessary changes to make greener collection and recycling possible.