Waste management in Sweden has become a “recycling revolution”

99% of household garbage is now recycled in Sweden.

In what has been called a “recycling revolution”, the Scandinavian nation is moving closer and closer to becoming a waste-free country, as less than 1% of the country’s household trash is dumped in landfills due to its innovative recycling program that enables highly efficient waste management.

Sweden imports nearly 800,000 tons of trash per year from other European countries.

Although Swedes typically generate as much, or just slightly less, waste as people in other countries every year (roughly 461 kilograms per person, annually), due to the countries incredible recycling program, only about 1% ends up at landfill sites.

However, the amount of waste that is produced by the nation is not enough to feed the 32 waste-to-energy plants in Sweden, which transforms garbage into electricity. In order to keep these plants in operation, the county imports trash from other countries. More specifically, it receives almost 800,000 tons of garbage from the UK, Ireland, Italy and Norway. This is a practice that has been going on for years.

Anna-Carin Gripwell, the Swedish Waste Management communications director, said of traditional dump sites that “When waste sits in landfills, leaking methane gas and other greenhouse gasses, it is obviously not good for the environment.” As a result, Sweden developed alternatives that would not only benefit the environment, but the country’s economy.

“Waste today is a commodity in a different way than it has been. It’s not only waste, it’s a business,” Gripwell stated. 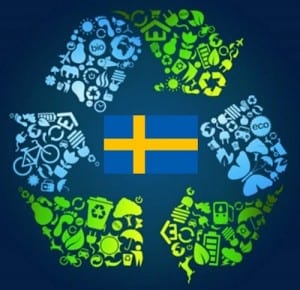 The program consists of several different components and functions as a hierarchy for managing waste in an effort to reduce environmental damage. It focuses on:

About half of the nation’s trash is converted into energy. That said, before garbage is taken away to incinerator plants, the trash is sorted by businesses and home owners. Paper is taken from recycling bins, organic waste is separated, and whatever items can be salvaged and reused are set aside. Everything in Swedish households from plastic containers and newspapers to electronics and food are separated and recycled.

The waste management program is so well organized and managed in Sweden, that the nation’s citizens can make their own recycling drop-offs because there are recycling stations within 300 meters from all residential areas.