Wind energy has established a major foothold in Scotland. The Scottish government has been investing quite heavily in the development of new wind farms for some time, hoping to become less reliant on fossil-fuels and foreign sources of power. Wind has garnered the government’s attention because of its efficient nature and falling costs. Last month, wind turbines in Scotland were able to generate enough electricity to supply the average energy needs for nearly all households.

Data from WeatherEnergy, an organization that collects information on renewable energy systems, shows that wind turbines in Scotland generated 792,717 megwatt-hours of electricity in October. This is nearly a quarter more electricity generated by these wind turbines in September. WWF Scotland notes that this is enough energy to supply 87% of Scottish homes with the energy they need. This represents major growth in Scotland’s wind energy market, which continues to experience a period of rapid expansion thanks to government efforts. 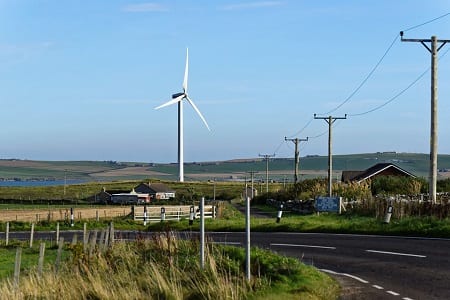 The Scottish government has shown strong support for the wind energy market. Notably, offshore wind power has begun to gain traction. Currently, Scotland has some 197 megawatts of offshore wind capacity in operation off the eastern coast. This capacity is expected to rise quickly, however, as numerous offshore projects are at various stages of planning. Offshore wind may end up playing a major role in Scotland’s efforts to become more environmentally friendly and less reliant on fossil-fuels.

The Scottish government has set a target of generating no less than 100% of its electricity from renewable sources by 2020. The majority of this power is expected to come from the wind energy market. Government policies have secured Scotland as a favorable place for the wind energy market to thrive. Many wind developers have managed to take advantage of these policies, bringing their projects to fruition.