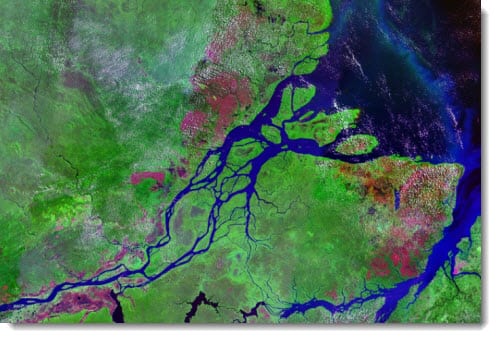 Researchers from Yale University claim that there is a significant amount of energy to be had in tapping a virtually unknown source. Yale’s Menachem Elimelech and Ngai Yin Yip have been working to find new sources of energy that could serve as a decent replacement of fossil-fuels. The two have found that rivers flowing into the sea hold vast potential as a source of energy. This energy can be harvested through a process that does not require any fuel of its own and produces no harmful emissions.

Little-known process to convert freshwater and seawater into electricity

The process is known as pressure-retarded osmosis (PRO) and involved exploiting the differences in the salt content of freshwater and seawater. In a PRO system, freshwater moves through a serious of membranes due to osmosis – this is powered by the presence of seawater. The pressure created by the flow of water is used to spin turbines, which produce electricity. A PRO power plant already exists in Norway and has been producing a significant amount of electricity since it first began operating in 2009.

Possibilities of a PRO power plant

Elimelech and Yip believe that PRO power plants could be the next step in the evolution of alternative energy. The researchers note that the PRO power plants could produce large amounts of energy by using little more than one-tenth of the world’s supply of river water, harnessing this water as it flows into the ocean. Researchers believe that a PRO power plant could produce enough electricity to meet the needs of 520 million people. This would be done without any environmentally harmful byproducts and could help cut approximately one billion tons of greenhouse gases annually.

As alternative energy becomes a popular issue, focus is being directed toward the discovery of new energy systems.

Current alternative energy systems, such as solar, wind and hydrogen, have become somewhat famous, but represent a small portion of the clean energy spectrum. Governments around the world are working on breaking their dependence on fossil-fuel and have begun to look for affordable alternatives. A PRO power plant may be a viable solution, giving these governments the ability to discontinue using fossil-fuels and adopt renewable fuels as their primary source of energy.