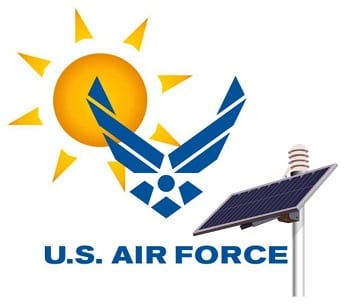 The U.S. military has been increasing its support for renewable energy for some time. The Department of Defense considers energy to be a matter of national security and has gone so far as to identify climate change as a dangerous issue for the whole country. In order to become more energy independent, the Department of Defense has tasked the various branches of the military with embracing renewable energy more aggressively. Solar power has become one of the most heavily supported forms of clean energy.

In the past, the Army had been considered a leader in the solar energy field. Now, however, the Air Force has announced the completion of a new solar power plant that is located at the Davis-Monthan Air Force Base in Arizona. The solar power plant has a maximum capacity of 16.4 megawaats, which is enough to meet approximately 35% of the base’s energy requirements. The new energy system has also pushed the Air Force ahead of the Army in terms of solar energy adoption.

Solar power has become attractive because of its environmental and economic benefits. The costs associated with photovoltaic technologies and their installation have fallen dramatically over the past several years. When compared to other forms of clean energy, solar power is rapidly approaching a point where it can be considered the most inexpensive form of power. Embracing solar power is expected to lead to significant savings in energy costs in the future while also significantly reducing the need for fossil-fuels.

Renewable energy is a safe alternative to fossil-fuels

One of the reasons that renewable energy has become an important focus for the military has to do with safety. In foreign countries, the military relies heavily on fuel transports that often travel through hostile territory. Fuel transports are considered high value targets and require personnel for protection. By focusing more heavily on clean energy, reliance on fuel transports diminishes, thereby introducing a little more safety to those operating in hostile territories.