The offshore wind sector in the U.S. is slow going compared to other regions in the world.

Wind energy turbines located offshore is nothing out of the ordinary in Europe and China, but in America, while offshore projects have been proposed and planned, the actual development and building of these projects has been slow, which developers and industry experts have said is due to regulatory hurdles, opposition from those who are more interested in pursuing fossil fuels, and all of the troubles associated with setting up something new for the first time.

Five offshore wind turbines will be installed near Rhode Island by 2016.

While, according to the American Wind Energy Association, there are 11 offshore wind projects planned and in various stages of development in 10 different U.S. sates, a Rhode Island project has made the most progress and is the first in the country to begin construction on an offshore wind farm.

The $290 million wind farm, which is being developed by Deepwater Wind, will reside off the coast of a small island known as Block Island, which is approximately 13 miles south of Rhode Island. The farm is expected to be fully operational by the fall of next year. 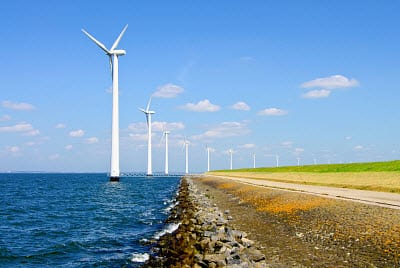 In total, the project will be a 30 megawatt (MW) wind farm featuring five turbines. It is expected to generate enough energy to power all businesses and homes on Block Island. Currently, most of the island’s residents depend on diesel generators for electricity. In addition, some of the energy will be sent to mainland Rhode Island.

Progress is also being made by the utility Dominion Virginia Power, which recently received a wind research lease that will enable the utility to test and operate two wind turbines in federal waters. Expected to be completed in 2017, the $250 million demonstration could assist the company in determining how and where the full-scale offshore wind project should be built.

Nonetheless, in spite of recent efforts and critical steps forward, compared to European offshore wind energy development, the United States is miles behind. While the country is celebrating its victory over its first construction, there are 2,500 turbines in waters located near 11 European countries. According to the European Wind Energy Association, combined, the total power generation of these offshore turbines is around 8,000 MW, which is about equal to the amount of power generated by 16 large coal-fired plants. Needless to say, America has a lot of catching up to do in this particular wind power sector.