California has plans to bolsters its hydrogen fuel infrastructure in the coming months. The state will be spending $50 million to build 28 new hydrogen fuel stations that will be open to the public. These fuel stations will be located in dense population centers like Riverside and Ontario. The state hopes to have a modest infrastructure in place by the time fuel cell vehicles see commercial release in 2015 and this infrastructure will continue to expand over the coming years.

In 2015, some of the world’s major automakers will be releasing fuel cell vehicles. These vehicles use hydrogen fuel instead of conventional petroleum and produce no harmful emissions. Fuel cell vehicles are winning praise for their environmentally friendly nature, but they have also been criticized for their high cost and the general lack of a supporting fuel infrastructure. Without an infrastructure in place, these vehicles may not find success, which is why some automakers are opting to wait to release their fuel cell vehicles until 2018 and beyond.

California may have 100 hydrogen fuel stations operational by 2020 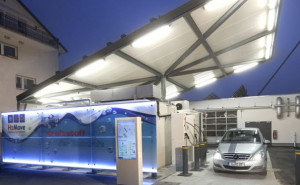 The California Energy Commission expects that the state will have 51 hydrogen stations open to the public by 2017, with this number growing to 100 by 2020. These fueling stations are likely to make fuel cell vehicles somewhat more attractive to consumers, but a working infrastructure is not the only thing that drivers want. If fuel cell vehicles cannot be made more affordable, they will not likely find the traction they need with consumers to remain a viable investment for automakers.

The $50 million that California is spending on hydrogen fuel stations is coming from fees that are being levied on vehicle licenses, vessel registrations, and identification plates. The state has already committed $110 million toward making fuel cell vehicles more easily obtainable by consumers. Whether or not the state’s incentives will prove successful has yet to be seen.