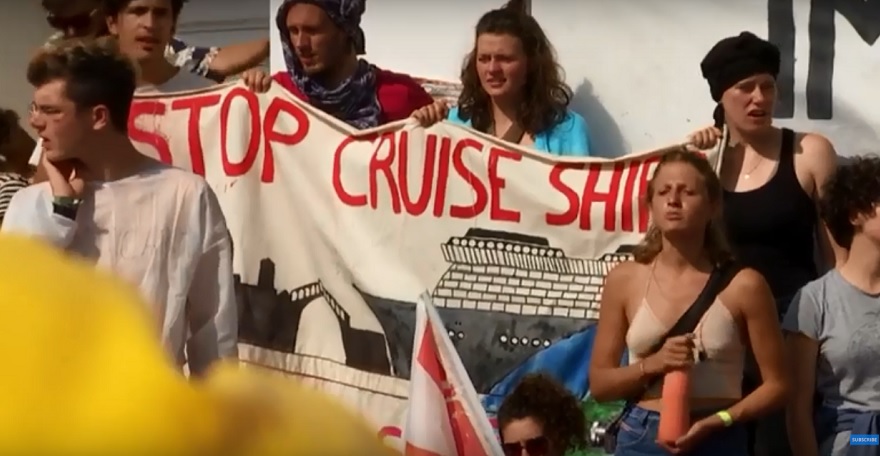 It wasn’t only famous faces that could be seen on the annual film festival’s red carpet.

Top Hollywood movie stars were not the only ones that could be seen on the red carpet of this year’s 2019 Venice Film Festival. Hundreds of climate change activists took over the red carpet for several hours on Saturday. With their voices and signs, the peaceful demonstrators demanded action to fight climate change and ban cruise ships from entering the sinking city.

Approximately 300 protestors arrived in the early morning hours on Saturday.

On the final day of the 11-day event, the estimated 300 protestors arrived on the scene, wearing white boiler suits and waving banners that read “No to cruise ships” and “Our home is on fire,”Reuters reports. They sat just outside the main festival venue, surrounded by police.

The demonstrators, who are a part of both Italian and foreign climate change activist groups, were in the lagoon city taking part in a five-day Venice Climate Camp event. They chose the Venice Film Festival for their protest because they wanted to garner higher attention for their cause, as well as celebrity backing.

“We want to address the topic of the climate crisis, we think that it is more important than anything that we can see in the world now,” said a member of the Venice anti-cruise ship committee, Chiara Buratti.

Mick Jagger and Donald Sutherland were among the Venice Film Festival celebrity attendees to support the protestors.

The protestors’ red carpet mission was not without success. They managed to obtain the support of veteran celebrities, Mick Jagger and Donald Sutherland, who were at the festival supporting their movie The Burnt Orange Hersey.

“When you’re my age,” said Sutherland during a news conference to support the film, “and you have children and grandchildren, you will leave them nothing if we do not vote those people out of office in Brazil, in London and in Washington. They are ruining the world. We have contributed to the ruination of it, but they are ensuring it.”

Sutherland added that environmental protestors need to fight harder and get as much support as they can.

Jagger said of the protestors that he’s glad they’re doing it “because they’re the ones that are going to inherit the planet.”

“I am glad people feel so strongly about it they want to protest anywhere,” Jagger continued at the Venice Film Festival news conference, “whether it’s the red carpet or another place.”