Chernobyl may become home to a large solar energy system

Thirty years after the nuclear disaster of Chernobyl, the Ukraine is seeking to turn what has become a massive nuclear “wasteland” into a home for solar energy. The Chernobyl disaster occurred in 1986 when the Chernobyl Nuclear Power Plant located in the city of Pripyat suffered a catastrophic meltdown. The surrounding area has been quarantined since the disaster, with all human traffic being forbidden. Despite the area being referred to as a “wasteland,” life has actually thrived therein, with flora and fauna reclaiming land that had once been rife with human life.

Chernobyl is surrounded by a 1,000 square mile exclusion zone. No people are permitted into this area due to the potential danger of being exposed to extreme nuclear radiation. This radiation has made farming and forestry too dangerous, but the region may have vast, untapped renewable energy potential. The Ukrainian government intends to take advantage of this potential, installing new solar energy systems in the region as a way to generate electrical power. 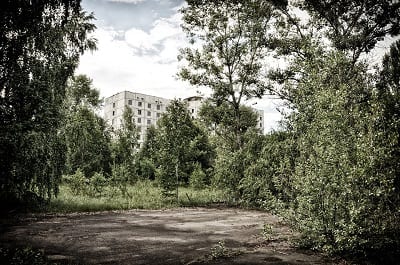 The Ukraine’s environmental ministry wants to build a solar complex within Chernobyl’s exclusion zone. The plan has already attracted interest from two investment firms in the United States and four energy developers from Canada. Energy developers in the Ukraine expect to install 4 megawatts worth of solar energy capacity within the exclusion zone by the end of this year. The solar complex can take advantage of high-voltage transmission lines that were installed to transport energy generated from the Chernobyl Nuclear Power Plant. These transmission lines have been unused since the Chernobyl disaster.

The Ukraine could benefit from a new solar energy system

The Ukraine has expressed concerns regarding the impact that the solar complex could have on the environment and the potential health risks involved with working in the exclusion zone. Tapping into solar energy may be too good of an opportunity to pass up. For many years, the Ukraine has relied on natural gas as its primary form of power. Increasing tensions with Russia, however, have placed its access to natural gas in jeopardy.