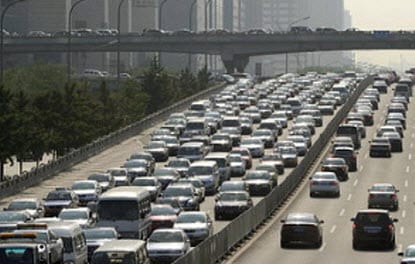 The Chinese government has issued a new mandate that may help the country win its fight against carbon emissions and embrace clean transportation. China’s largest cities have been fighting air pollution for some time now, but little has been done to mitigate emissions generated in the transportation sector. Only recently has the government begun to address this issue aggressively due to the fact that air pollution is being linked to serious health issues in many parts of the country.

The new mandate calls for 30% of all government vehicles purchased within the next two years to be electric or powered by clean fuel. Conventional electric vehicles, plug-in hybrids, and hydrogen fuel cell vehicles comply with the government’s new mandate. These vehicles produce little to no harmful emissions as they are operating and could cut down on the carbon dioxide that is produced by China’s massive transportation sector.

The Chinese government aims to have some 500,000 clean vehicles on the road by the end of 2015. Currently, less than 100,000 of these vehicles are operating throughout China. By 2020, China aims to have more than 5 million clean vehicles in operation. This goal may be difficult to meet, however, due to various issues, one of the most significant of which is the cost of these vehicles. Conventional vehicles are often less expensive than their cleaner counterparts, making them much more attractive to consumers that do not have a significant amount of money to spend on personal transportation.