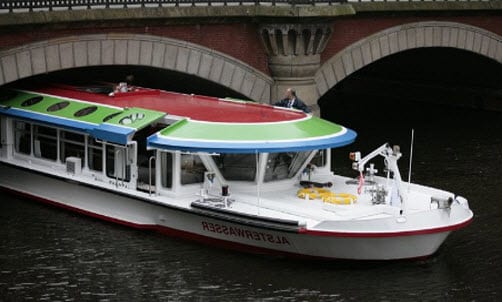 Full-size hydrogen fuel cell system...
➡️PLAY THIS HYDROGEN NEWS ARTICLE IN: ENGLISH, FRENCH & GERMAN
The FCS Alsterwasser is equipped with two hydrogen fuel cell systems that provide power for the entire ship. No less than 12 hydrogen fuel tanks are housed on the ship to ensure that the fuel cells receive a constant flow of the fuel they need to generate electricity. If the fuel cells should fail for any reason, the ship is also equipped with a lead-gel battery that will pick up the slack. A sophisticated energy management system determines whether the ship requires the majority of its energy from the fuels cells or the battery. More often than not, the ship receives the majority of its electrical power from its onboard hydrogen fuel cells.