Fracking could be harmful to California groundwater

A new report has found that drilling for oil could threaten the state’s ground water sources.

According to a federally commissioned report from the California Council on Science and Technology, fracking for oil in California occurs below ground at depths that are shallower than was previously believed and the depth at which the mining process takes place could pollute groundwater supplies that are precious to the state, which has been experiencing drought and water shortages.

Chemicals used in the hydraulic fracturing process could seep into drinking water.

The report discovered that half of the oil wells that are fracked in the state are 2,000 feet below the surface and are close to aquifers. The fissures that result from hydrofracking, a process that involves injecting a high pressure mixture of water, chemicals and sand into the ground to crack (fracture) rocks that contain natural gas or oil, can occasionally reach as high as 1,969 feet, which is close to the surface.

Due to this fact, the report says that it is possible that the chemicals used in fracking, some of which are toxic, could travel along the cracks that are made and leak into drinking water. While there is no record of such a problem occurring in California, the authors of the study have noted that it remains a possibility and because of this further study is needed. 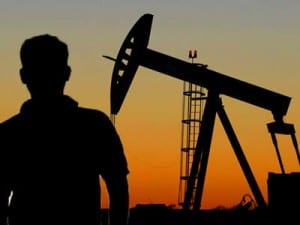 The report states that “In California, hydraulic fracturing is occurring at relatively shallow depths and presents an inherent risk for fractures to intersect nearby aquifers.” This is troubling news because according to the U.S. Geological Survey, the majority of hydraulic fracturing in the state takes place in Kern County and the water wells in the county are 600 to 800 feet below the surface.

Those who are opposed to fracking consider the report to be flawed.

Even the authors of the report noted that a lot of the information they were hoping to find about hydraulic fracturing and other kinds of well stimulation, does not yet exist. In addition, the report expressed its doubts in regard to the Monterey Shale experiencing a boom in oil production that would be equal to what has been seen in Texas and North Dakota.

The director of the Climate Law Institute at the Center for Biological Diversity, Kassie Siegel, commented that the report has raised too many red flags to allow for the support of more fracking. Siegel’s group is responsible for the lawsuit that led to the U.S. Bureau of Land Management commissioning the report.