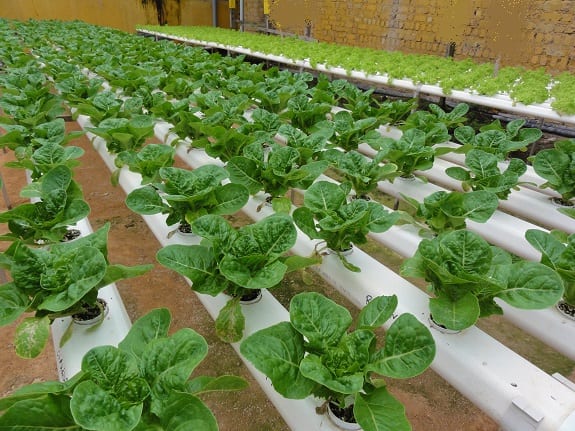 What was once a Fujitsu semiconductor factory, has been turned into one of the largest indoor farms in the world by Japanese plant experts, who wanted to explore green technology methods that could be used to help keep up with growing food demands, but that would sidestep the risks caused by crop disease, drought and natural disasters.

The farm opened in July and is almost half the size of a football field.

The bacteria-free indoor farm churns out 10,000 heads of lettuce per day. The room is climate controlled and it is powered by LED fixtures that produce light at wavelengths that are perfect for plant growth. Furthermore, the LEDs also give the plant physiologists the ability to control the day and night growing cycles.

“I knew how to grow good vegetables biologically and I wanted to integrate that knowledge with hardware to make things happen,” said plant physiologist Shigeharu Shimamura. “We want to achieve the best combination of photosynthesis during the day and breathing at night by controlling the lighting and the environment,” he added.

The LED lights were developed by General Electric (GE). The lights give the “farmers” the power to control the environment of the farm. They can control temperature, irrigation and humidity, which allows the farm not only to reduce its water usage to 1% of what is required by outdoor farm fields but, according to the claims of experts, also results in lettuces growing two and a half times quicker. GE says there are 17,500 LED lights on eighteen cultivation racks that are fifteen levels high.

However, GE is not the only electrical company testing out this new green growing method. Philips has joined Indiana-based vertical farm, Green Sense Farms, which grows lettuces, leafy greens and herbs using LEDs.

It is the hope of many that indoor farms using this green technology, such as the one in Miyagi Prefecture, a region in Japan that was severely damage from the powerful earthquake and tsunami that occurred in 2011, may be a viable solution for solving food shortage problems across the globe.