Hydrogen fuel car from Toyota may be “perfect,” according to acclaimed physicist

Michio Kaku believes that the Toyota Mirai is the “perfect car”

Doctor Michio Kaku, a theoretical physicist, attended this year’s Consumer Electronics Show in Las Vegas, Nevada, to speak on behalf of the Toyota Mirai. The Mirai is Toyota’s first attempt to commercialize a fuel cell vehicle. The automaker has been promoting this vehicle for some time, suggesting that it could be a step toward a future that is powered by hydrogen fuel cells. Kaku believes that the Mirai may be the “perfect car.”

Toyota aims to sell the Mirai for $57,000, which will be lower thanks to tax credits

The Mirai is expected to be sold in California later this year for $57,000. The cost of the vehicle will be reduced through tax credits that the California government is offering to those purchasing the fuel cell vehicle. The Mirai uses a hydrogen fuel cell to produce the electrical power it needs to operate and Toyota suggests that the vehicle can travel 300 miles on a single tank of hydrogen fuel.

Mirai may adhere to four standards in the clean transportation space 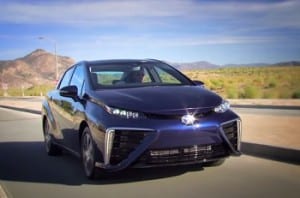 Kaku suggests that the Mirai may be perfect because it adheres to four standards that exist in the clean transportation space. First, the Mirai derives energy from the most plentiful element in the known universe: Hydrogen. The vehicle also has very few moving parts, which means that it will require less maintenance. The Mirai also emits no harmful gases into the environment, with the only byproduct of its hydrogen fuel cell being water and oxygen. Kaku also suggests that the Mirai is consumer friendly, especially in terms of cost.