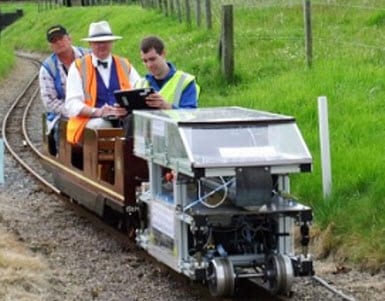 A team of students and faculty from the University of Birmingham in the United Kingdom have created a hydrogen-powered locomotive for an upcoming competition. The project is being hailed as the first of its kind in the country, and has successfully transported passengers over a short distance. Though the train may not be luxurious, it is efficient and surprisingly powerful. The team has high hopes for its hydrogen-powered locomotive, believing that it will serve as an example for the efficiency and performance of fuel cells and how they can be used in transportation.

The locomotive is equipped with a hydrogen fuel cell that powers the train’s permanent magnet electric motors. The fuel cell also funnels electricity to batteries that help meet the energy demands of the train during peak operation periods. The train carries a single fuel tank that can carry 5,000 liters of hydrogen. The team that created the train claims that it can store up to two more fuel tanks in order to increase the vehicle’s range. The train has been tested at Leicestershire’s Stapleforde Miniature Railway.

Fuel cells continues to grow in popularity despite costs of production

Hydrogen fuel cells continue to generate buzz in the transportation industry. Automakers have taken a liking to the technology because of its efficiency and ability to help them comply with government standards. In terms of public transportation, fuel cells are often praised for the economic potential as they can lower the cost of fuel for public vehicles like trains and buses. Fuel cells are expensive to manufacture, however, which has been a serious detractor. The hydrogen fuel cell system developed by University of Birmingham students and staff cost approximately $6,500, which is a hefty sum considering the train’s diminutive size.

Hydrogen may continue to struggle without advances to fuel cell technology

There are efforts to reduce the cost of fuel cell production by incorporating low-cost materials and replacing the platinum catalysts that are found in most common fuel cells. As technology becomes more advanced, hydrogen fuel may be able to garner more support in terms of transportation. For now, however, hydrogen fuel cells will continue to struggle to attain the favor of consumers and companies interested in alternative energy.