B-Class F-Cell reaches a new milestone, showing off the capabilities of fuel cells

German automaker Mercedes-Benz has reached a new milestone with its B-Class F-Cell fuel cell vehicle. The company has been promoting hydrogen fuel cells in transportation for the past few years and was one of the first to showcase the performance on these energy systems in the transportation space. A few years ago, the automaker succeeded in taking its B-Class F-Cell vehicles around the world, showing that fuel cell vehicles can compete with their conventional counterparts without much trouble.

The B-Class F-Cell has now recorded more than 186,000 miles of continues travel. This milestone could help shed some light on the capabilities of hydrogen fuel cells and dispel some of the concerns that people have regarding the efficiency of vehicles that use them. Mercedes-Benz believes that its ongoing trial will help attract more attention to clean transportation and the options that exist therein. 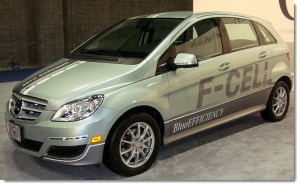 Since 2010, the B-Class F-Cell vehicle has been in daily use among consumers in Europe and America. While the availability of the vehicle is quite limited, it has managed to gain significant traction in many markets. Currently, the vehicle accounts for the majority of Daimler’s fuel cell fleet, which is 300 strong. Daimler has some concerns when it comes to fuel cell vehicles, but the company has not yet stifled Mercedes-Benz’s plans to commercialize these vehicles in the coming years.