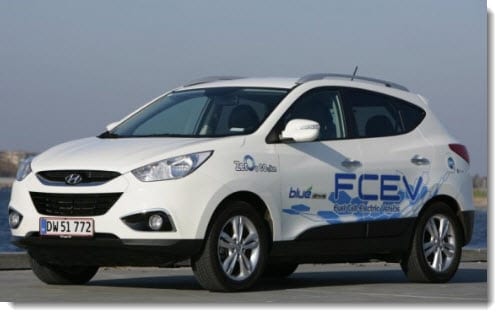 Hyundai has been inching closer to the commercialization of hydrogen powered vehicles recently. The South Korean automaker has made significant progress in ramping up the hype around hydrogen-powered vehicles with its Tucson ix35 SUV. When hydrogen transportation started gaining momentum a few years ago, Hyundai was not considered to be a significant competitor in the market. Now, however, the automaker boasts of one of the strongest presences in the market and may be the first to successfully commercialize hydrogen-powered vehicles.

15 new ix35’s to be leased to Copenhagen Municipality

In the automaker’s continued work to promote hydrogen transportation, Hyundai has announced that fifteen of its ix35 vehicles will be leased to the Copenhagen Municipality in Denmark. The deal is part of the Danish capital’s efforts to become carbon neutral by 2025. The vehicles will help in this endeavor as they produce no harmful emissions while operating. Hyundai plans to deliver the vehicles to the Copenhagen Municipality in spring of 2013.

The deal represents the first of its kind for Hyundai. The automaker has been working with the Scottish government to provide hydrogen powered vehicles for use by state officials, but Denmark has become the first to officially use the ix35 in such a capacity. The Tucson ix35 represents approximately fourteen years of research and development in hydrogen fuel cell technology. Since 1998, Hyundai has been laboring to commercialize fuel cells, but has met several challenges that could not be overcome due to technological constraints.

Auto industry aims for release of vehicles by 2015

Most of the world’s major automakers have plans to introduce hydrogen powered vehicles to the global market by 2015. Some, such as Mercedes-Benz, plan to release vehicles sooner, but the success of these vehicles is dubious. Most of the auto industry believes that the hydrogen fuel infrastructure needed to support the commercialization of a new form of transportation will not be ready until 2015 at the earliest. Hyundai is among the automakers that believes hydrogen transportation should take root as soon as possible.