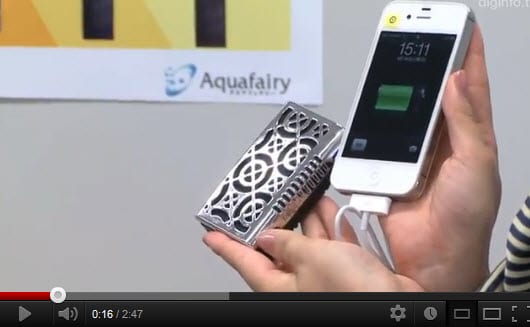 Fuel cells are most often used as industrial power systems, but have been becoming more popular in the fields of transportation and residential energy. As fuel cells become smaller, they are finding more use, especially in regards to mobile technology. A portable fuel cell is capable of providing a significant amount of electricity to mobile devices, removing the need for a consumer to plug their devices into an outlet. The Japanese research team believes that such fuel cells may play a large role in the future of mobile electronics.

The portable fuel cell developed by the research team is roughly the size of an average credit card. It is a calcium-based system that is capable of generating approximately 4 liters of hydrogen fuel from 3 grams of a calcium compound. This system is based on existing technology from Aquafairy. The hydrogen generated by the portable fuel cell is then converted into electricity through the use of a proton exchange membrane (PEM), which is common in small scale fuel cells. Researchers claim that the fuel cell is capable of producing up to 5 watt-hours of electricity, which is enough to charge most mobile devices within two hours.

Commercialization expected to begin in 2013

The compact design of the portable fuel cell is billed as one of the major features of the energy system. The size is expected to garner the favor of consumers who are not keen to carry around bulky, cumbersome devices. Commercialization of the portable fuel cell will begin in 2013 and this effort will take root in Japan, where the market is deemed ripest in terms of mobile electronics and the demand for portable charging devices.