Researchers from South Korea’s Ulsan National Institute of Science and Technology have developed a new material that can be used by solid oxide fuel cells. These stationary fuel cells are quite common in some industrial sectors, where they are used because of their ability to produce large amounts of electrical power. These fuel cells typically use hydrogen fuel to produce electrical power and have been the subject of research in recent years by groups attempting to make fuel cell technology more efficient and less expensive.

During their research, the group was able to design an electrode that is comprised of multiple layers of a material called perovskite. In modern solid oxide fuel cells, carbon adheres to the electrodes they use, causing corrosion. Carbon does not adhere to the perovskite electrode that the research team has developed, however, making it more resilient to the corrosive environment that can be found within a fuel cell. Researchers also found that a fuel cell equipped with their perovskite electrode performed three times better than those with more conventional electrodes. 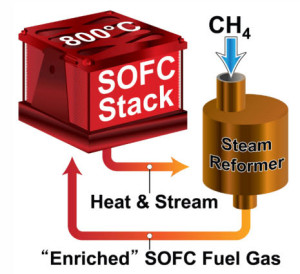 New electrodes could be a step toward making solid oxide fuel cells a reliable residential energy system. These fuel cells are typically used for industrial purposes, but fuel cells, in general, are beginning to attract attention for their potential uses in the residential sector. One of the major barriers preventing fuel cells from entering the residential market is their high cost, but there are also concerns about their longevity. The longer a fuel cell operates, the more likely it is to break down over time due to corrosion. The research group was able to maintain a high level of performance with their solid oxide fuel cell for more than 500 hours without recording any significant degree of corrosion.

Use of new materials could reduce the cost of fuel cells

By 2020, the global fuel cell market is expected to reach $6.19 billion in valuation. New materials could help cut the cost of fuel cells, making them more attractive to consumers and businesses alike. The research group believes that using new materials for electrodes could cut the manufacturing cost of fuel cells by a significant margin.