Solar energy feed-in tariffs are a success in Germany

Report shows that feed-in tariffs have been massively successful

The Solar Energy Industries Association has released a new report focusing on the solar feed-in tariffs in Germany. The country had established itself as a prominent leader in solar power in recent years, with its success in the solar field largely being powered by its feed-in tariffs. These tariffs allowed a wider demographic to embrace solar power and many homeowners throughout the country were able to take advantage of the financial benefits of these tariffs. The initiative had proven so popular that the government opted to reduce the tariffs in order to remain financially stable.

Tariffs have helped reduce the cost of solar technologies

The report from the Solar Energy Industries Association shows that the feed-in tariffs have been massively successful in boosting the adoption of solar power. The report notes that feed-in tariffs were able to have a significant impact on the cost of photovoltaic technologies. As the demand for solar power systems rose, the faster these systems were produced. Better manufacturing methods were adopted that helped develop solar panels more efficiently and at a lower cost. As supply began to outpace demand, the cost of these technologies began to drop.

Tariffs may be helping Germany reduce its reliance on fossil-fuels 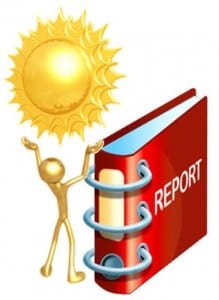 The report suggests that Germany’s feed-in tariffs have helped the country move closer to its goal of becoming “de-fossilized.” The country is keen to move away from fossil-fuels, eventually abandoning coal and oil within the relatively near future. In order to accomplish this ambitious goal, a stronger focus on renewable energy has been adopted. The country is currently undergoing an energy revolution, wherein clean power is beginning to show more promise than more conventional forms of energy.

Solar energy is one of the most favored and well supported forms of clean power in Germany. The country also has a strong interest in wind energy, however. Some towns in Germany have managed to satisfy their energy needs by relying on wind farms located in their regions. Germany has also expressed an interest in offshore wind farms and how they could be used to power the country.