Solar energy has reached a major milestone in the United Kingdom. Over the past six month, solar energy systems have generated more electricity than coal for the first time ever. An analysis from Carbon Brief shows that solar panels generated approximately $7,000 gigawatt-hours of electricity from April to September. This is approximately 10% more than the energy generated through the use of coal.

Production of solar power is quickly growing in the UK 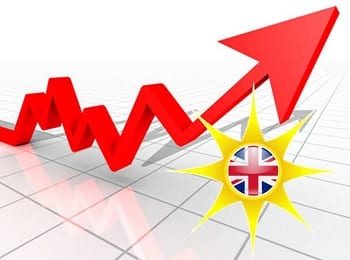 According to James Court from the Renewable Energy Association, solar power surpassing coal in terms of electricity generation would have been “unthinkable” only 5 years ago. Back then, solar panels were still quite expensive and many old photovoltaic technologies were considered inefficient. These two factors made solar power less attractive. In recent years, however, the cost of solar energy has fallen dramatically, making this form of clean power much more attractive and viable.

Homeowners, in particular, are some of the biggest supporters of solar energy in the United Kingdom. Because of the falling cost of solar panels, many homeowners have been embracing these energy systems. These homeowners are also taking advantage of government programs meant to incentivize the adoption of solar power. Despite this growing support from homeowners, the rate at which new solar energy systems that were installed in 2016 was only a third of what was installed last year. This is largely due to dwindling financial support from the government.