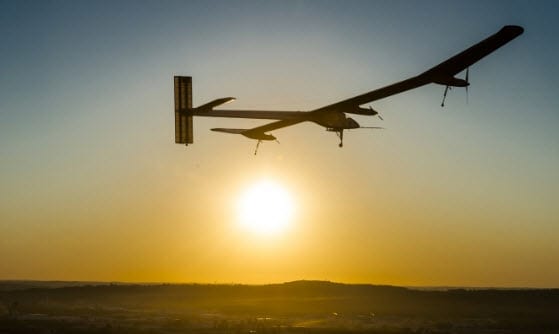 Solar energy may be gaining attention in aviation

Solar Impulse shows off the capabilities of solar energy

This week, the Solar Impulse, a solar-powered plane, successfully landed in at Moffett Field in Mountain View, California. The Solar Impulse is among the first of its kind: A plane that uses the power of the sun rather than relying on fossil-fuels or other forms of clean energy. While it may not be the first plane to make use of solar energy, it is the first to successfully fly day and night without fuel. During the day, the plane’s 12,000 solar panels collect sunlight and power its four engines. Excess energy is stored in 4 lithium-polymer batteries, which are used to power the plane at night. This system enables the Solar Impulse to fly continuously without having to land.

Solar Impulse to travel across the country

The Solar Impulse is set to trek across the U.S. in May of this year. The plane  will launch from San Francisco, California, and makes its way to four major cities across the country before finishing its trek in New York. Though the plane does not have any specific need to land, the Solar Impulse will stop at each major city along its route in order to host events and exhibitions. During these stops, the plane’s pilots will show off the technology and engineering that keeps the Solar Impulse in the air.

Solar energy may be useful for aviation

Solar energy may be an adequate solution to the energy problems facing the aviation sector. This type of renewable energy faces its own challenges in this sector, of course. Solar Impulse is able to use solar energy to stay in the air because the plane itself is exceedingly light, coming in at only 3,527 pounds, significantly lighter than commercial aircraft. Larger planes require more energy and it is currently uncertain whether solar energy systems would be able to produce enough power to meet the needs of commercial planes, especially those that travel during the night.