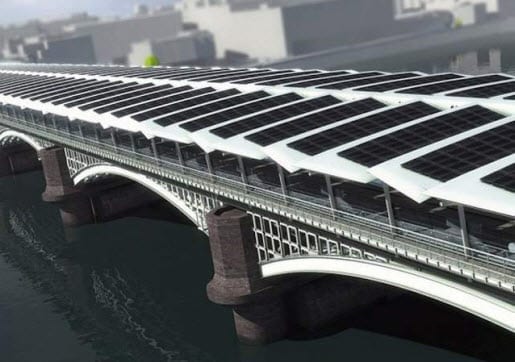 The world’s largest solar bridge is currently under construction in the UK.

The massive structure, which is being built on the roof on Blackfriar’s Bridge in London, will be comprised of more than 4,000 photovoltaic solar panels. The bridge was first built in 1886, and has served as a landmark and a hub of railway transportation. The project seeks to modernize the bridge with technology that is fitting of the UK’s pursuit of energy independence and clean fuel. The solar bridge is expected to be complete in 2012.

At the helm of the project is Solarcentury, a solar power company based in the UK. According to the company, the bridge will be able to generate more than 900,000 kilowatt hours of electricity every year. This will account for 50% of the Blackfriar stations energy demands.

Solar panels are not the only thing coming to the bridge, however, as the company has more plans to use the sun to make the station more eco-friendly.

Solarcentury plans to install an extensive network of lighting fixtures they call “solar tubes.” The tubes will catch light from the sun and funnel it into the station, filling the area with natural light and warmth. The company is also designing a water harvesting system to take advantage of the abundant rainfall in the area. The water will be used for a number of purposes. The ambitious initiative has won the support of the public as more people grow concerned with the health of the environment.