The University of Birmingham has accepted one of the first deliveries of fuel cell vehicles in the United Kingdom. These vehicles come from Hyundai, which released its ix35 fuel cell vehicle some time ago. Hyundai has established a strong foothold in the clean transportation space, making efforts to aggressively promote the capabilities of hydrogen fuel cells and how these energy systems can be used in transportation to make vehicles more environmentally friendly.

New fuel cell vehicle has been leased through Lex Autolease 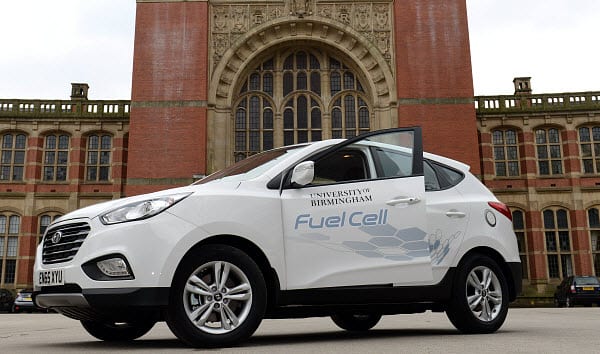 The new vehicles will be used for transportation for university staff and will operate as part of the university’s chauffeur service for visitors. Fuel will be provided by an onsite station, which was unveiled in 2008 and has been supporting research and development efforts being made on fuel cell technology. The University’s Center for Fuel Cell and Hydrogen Research has been working on ways to demonstrate the capabilities of hydrogen fuel cell systems, and the various instances in which these energy systems can be used effectively.

Clean transportation is gaining momentum in the United Kingdom

The University of Birmingham already employs 20 electric vehicles, which comprise approximately one-fifth of its overall fleet. Embracing clean transportation has been a priority for many organizations in the United Kingdom, especially as the government begins to focus more heavily on renewable energy and better environmental standards. Hyundai, and other automakers, have shown that they are eager to encourage the adoption of clean vehicles, especially those that use hydrogen fuel cells to generate the power they need.