Wind energy is struggling to find a foothold in California, and this may be due to the state’s policies concerning clean power. Recently, Governor Jerry Brown passed a law that requires the state to receive no less than 50% of its energy from renewable sources by 2030. Wind energy may not play a role in this, however, with the state focusing more heavily on other forms of clean power, such as solar energy.

Several counties are banning or severely restricting wind energy projects in California. Wind energy projects are also being restricted from vast expanses of federal land, which is home to strong wind currents that could be beneficial for the state. While California has shown strong support for renewable energy, restricting the growth of the wind market may make it difficult for the state to accomplish its environmental sustainability goals in the future.

Some 6.2% of the state’s energy comes from wind projects 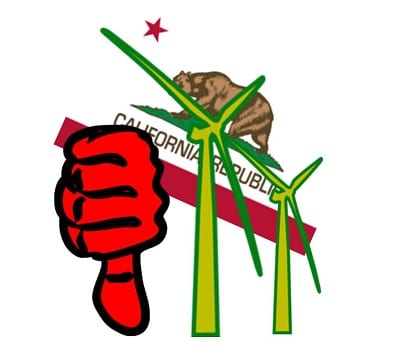 Wind energy had found support in the state in the past, but this support is now running dry. There is some 6,000 megawatts of wind capacity in operation in five counties in California. This capacity accounts for approximately 6.5% of the state’s energy production. Wind projects are particularly popular among farmers, as they represent significant economic potential. California’s long lasting and severe drought has created significant problems for farmers and other land owners. Farmers could recover from the financial losses associated with the drought by providing land for clean energy projects.

Wind is losing out to other forms of clean energy, including solar and fuel cells

Elsewhere in the United States, wind energy has begun gaining more support, but not necessarily from the federal government. The government has been showing stronger support for other forms of clean energy, such as solar power and hydrogen fuel cells. These energy solutions are relatively inexpensive when compared to wind projects, but are still relatively costly when compared to more conventional forms of energy.