Environment Canada, a government agency, is getting ready to test new radar technology in the hopes of solving the problems wind turbines create for meteorologists, who have a difficult time providing accurate weather forecasts because wind farms can distort and block radar signals, sometimes to extreme degrees, making it difficult to form accurate weather predictions.

The new software will be added to Canada’s radar system in the fall.

The reason there is a need for this technology is that Doppler radar, which is the vital technology utilized by meteorologists for making weather predictions, is distorted by wind farm activity. The trouble is that the movement of wind turbine propellers can imitate weather, making storms hard to predict.

According to Jim Young, who works at Environment Canada’s national radar program, accurate radar depends on movement. Objects that are still, such as trees, towers, and buildings are filtered out of the radar to enable the system to analyze the weather. Young stated that the disruption or “clutter” that is caused by wind turbines is based on how close they are to radar sites. “The closer you get, that clutter becomes larger and larger,” Young explained. 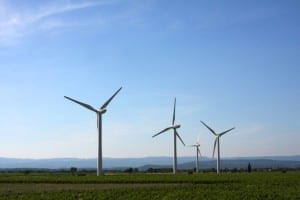 He added that in extreme situations, these machines designed to generate wind energy, can completely block radar scans. Young further explained the problem using a flashlight analogy by saying “If you put a large obstruction in front of your flashlight, you are going to create a shadow behind it, where you can’t see anything.” This same issue can happen when wind farms are scanned by radar.

Wind turbine farms may have to be shut down during extreme weather events.

Although it is likely that the software that Young has been working on for the past year in collaboration with research groups at McGill University and the University of Oklahoma will help forecasters to distinguish wind farms from weather, it may not be enough in cases of extreme weather.

For extra protection during these times, Environment Canada is working on finalizing a curtailment agreement with NextEra Energy Canada, a major wind energy firm. Part of the agreement will involve shutting off turbines if it should become necessary during situations of extreme weather.

In addition to weather forecasting, Young noted that other types of radar in the country can be affected by wind turbines, including air traffic control and air surveillance. He added that this is not only a problem in Canada but is an issue that affects the rest of the world, as well.