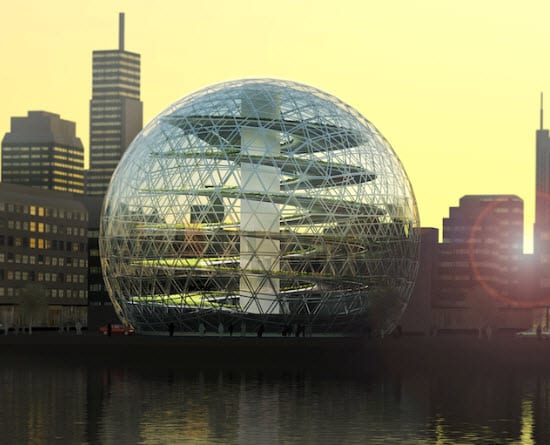 As the world’s population grows, governments are making efforts to create places for people to live.

Cities are beginning to expand and occupy space that was once home to wildlife. As the need for homes escalates, the question of resources and land for agriculture is gaining attention. Plantagon, a Swedish-American architecture design firm, may have a solution to the agriculture problem. Their solution comes in the form of urban farming, a concept that allows farmers to grow food within the boundaries of a city.

Plantagon has taken a bold step toward the world’s first urban farm. Last week, the company broke ground on their ambitious project in the city of Linkoping, Sweden. The farm is designed upon the company’s vertical farm concept. In the future, land might be scarce as the majority of it will be taken up by homes or commercial buildings. The sky, however, offers nearly limitless building space.

By erecting a vertical farm, agriculture can be kept within city limits without taking up an inordinate amount of room.

Plantagon’s project will be powered by alternative energy. Electricity will be generated through the use of solar panels, wind turbines and hydrogen fuel cells. Some of the energy systems feeding the urban farm will be located at the Tekniska Verken power plant near the city. Plantagon believes that this will be the first of many urban farms that will take root in major cities around the world.