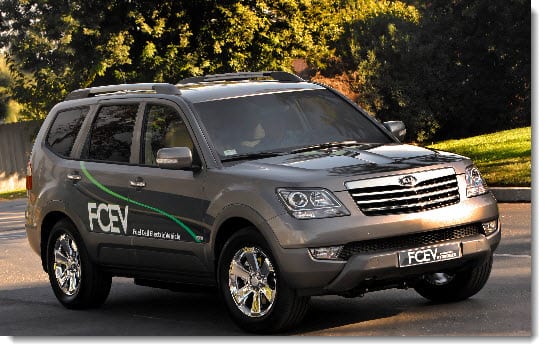 South Korean automaker Kia has announced plans to release its hydrogen-powered vehicle in 2015. These plans are similar to those coming from other automakers from around the world, but Kia plans to only release approximately 1,000 units for the initial production cycle. This is due to the lack of a comprehensive hydrogen fuel infrastructure in prominent markets. Without an adequate infrastructure, hydrogen-powered vehicles are not expected to find any significant success with consumers in prominent markets.

Automakers have been well aware of the lack of a hydrogen fuel infrastructure for some time. Many have invested in developing the needed fuel stations in several prominent markets around the world in order to address the issue, but forming a comprehensive infrastructure has been slow going. The lack of abundant hydrogen fuel stations has also been noticed by consumers. Many people criticize the concept of hydrogen-powered vehicles, suggesting that such vehicles are nothing more than a gimmick from the auto industry.

Kia plans for mass production beyond 2020

While there has been progress in developing a working hydrogen fuel infrastructure in many parts of the world, Kia does not foresee the infrastructure issue being resolved in the immediate future. The company does not plan to begin mass production of its own hydrogen-powered vehicle until after 2020. By that time, the automaker expects that hydrogen fuel stations will be quite common in Europe, the U.S., and Asia. Until then, Kia is expected to keep its focus on conventional vehicles as well as its electric models and plug-in hybrids.

Kia is currently working to promote clean transportation with its Clean Mobility program. This program involves the development and advocacy of clean technologies that can be used for transportation. The Kia Soul EV is the product of this program and will be the automaker’s first electric vehicle that will be sold in Europe.