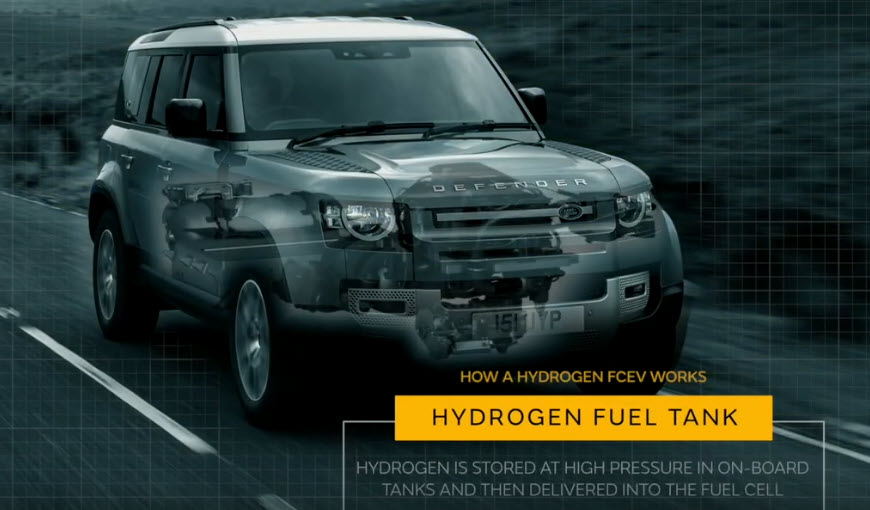 JLR has joined a consortium of partners to develop the H2 fuel cell powertrain for the vehicle.

Jaguar has announced that it is taking part in a consortium working to develop and build a Land Rover Defender prototype that would be powered by a hydrogen fuel cell technology.

The hydrogen fuel cell Land Rover Defender prototype will begin its road tests later in 2021, according to the company’s announcement. The vehicle is widely based on the existing Defender model and, according to the automaker, the testing will be focused on the vehicle’s “key attributes” such as the off-road capabilities and its fuel consumption.

This new prototype is a component of the automaker’s strategy to achieve zero-emissions from its vehicles by 2036 and to hit the net zero carbon emissions level across its entire operations and supply chain by 2039. Fuel cell electric vehicles (FCEVs) use hydrogen to generate electricity which then powers their electric motors.

The hydrogen powered Land Rover Defender will be a complement to Jaguar’s electric vehicles.

“We know hydrogen has a role to play in the future powertrain mix across the whole transport industry, and alongside battery electric vehicles,” said Jaguar Land Rover’s head of hydrogen and fuel cells division Ralph Clague.

The technology that powers FCEVs makes those vehicles “ideal for larger, longer-range vehicles, or those operated in hot or cold environments,” said JLR in its announcement of the upcoming prototype. The reason is that FCEVs “provide high energy density and rapid refuelling, and minimal loss of range in low temperatures.”

Several other automakers have continued their own development of hydrogen powered vehicles, though many have backed out of the passenger vehicle category. Toyota is among the only remaining major automakers that still has plans moving forward for hydrogen passenger vehicles. It recently rolled out its second generation of Mirai FCEV. Toyota plans to have 70 new zero-emission models

ready to roll out by 2025. Many other automakers have shifted their attention from passenger vehicles like the Land Rover Defender to heavy duty or long-haul vehicles instead.