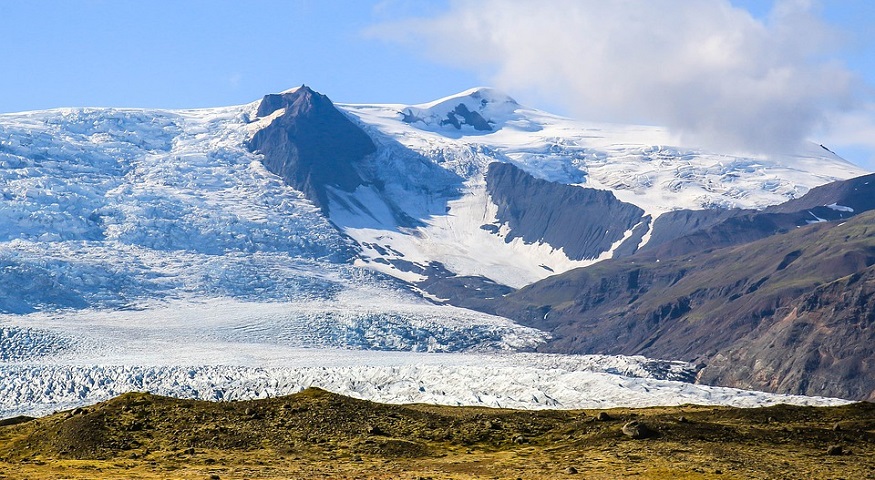 The ancient glacier is considered by many to be the first casualty of Iceland’s climate change.

The first casualty of climate change in Iceland is Okjökull, one of the more than 400 ancient glaciers that crown the Nordic nation’s mountains. Also known as Ok, the glacier has been shrinking over the years from global warming. In 2014, it had shrunk so much from our warming planet that it officially lost its glacier status.

Ok isn’t the only glacier to be affected by global warming. Increasing climate change in Iceland is also melting the ice of the country’s other ancient glaciers. The melting is so severe that scientists expect every one of the 400+ massive bodies of ice will eventually cease to exist in 200 years. The glaciers only hope: greenhouse gas emissions need to be significantly reduced in the coming decades.

Boyer has been studying the impact of glacial loss on Icelandic communities and he told CNN that glaciologists forecast that Iceland’s total glacial mass will vanish in the next 200 years.

Boyers says that this will result in a “massive impact to cultural heritage, tourism, hydroelectric power and fisheries” in the nation.

The demise of Ok is the latest warning that climbing global temperatures pose a serious threat to glaciers and the millions of people around the world who live near them.

Scientists have created a monument to Ok as a testament to climate change in Iceland.

Scientists have no intention of letting Ok die quietly. To memorialize the loss of this ancient glacier and the hundreds more predicted to share its fate by 2200, researchers from Iceland and the United States have created a memorial plaque to forever mark the spot where Okjökull once towered over the landscape.

The plaque carries a poignant message written in both Icelandic and English:

“Ok is the first Icelandic glacier to lose its status as a glacier. In the next 200 years, all our glaciers are expected to follow the same path. This monument is to acknowledge that we know what is happening and know what needs to be done. Only you know if we did it.”

Under the message reads “Ágúst 2019” and “415ppm C02,” which is the present ratio of greenhouse gasses in the Earth’s atmosphere.

“With this memorial, we want to underscore that it is up to us, the living, to collectively respond to the rapid loss of glaciers and the ongoing impacts of climate change,” said Cymene Howe, an anthropologist at Rice University in Houston and co-creator of a 2018 documentary on Ok.

According to a UN report, the majority of glaciers in Central Europe, Western Canada and the United States will disappear in the second half of this century if we continue to lose ice at our current rate.

“For Ok glacier it is already too late,” said Howe. “It is now what scientists call ‘dead ice.'”

Howe and her fellow scientists intend to install the plaque as part of an “un-glacier tour,” which will take locals and

visitors on a free hike to the former site of Okjökull, giving them the chance to see the impact of climate change in Iceland for themselves.